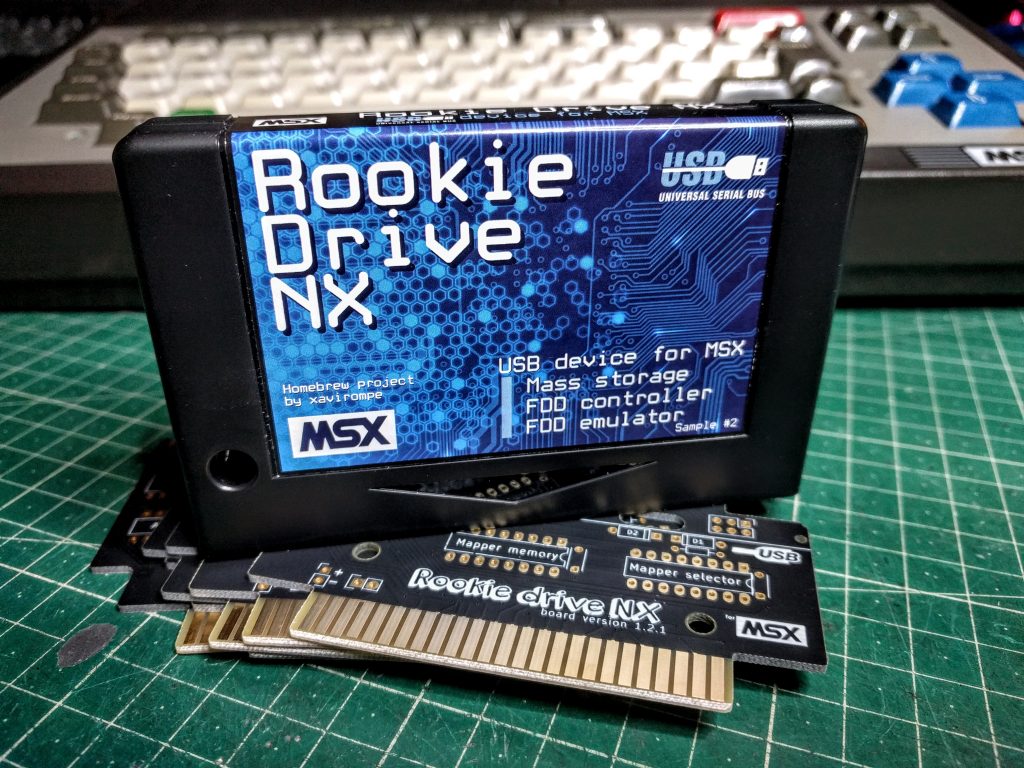 When starting, Rookie drive will try to detect the presence of USB disk drive with UFI protocol, if so the system will automatically load the floppy disk driver, otherwise, it will automatically start a code that will detect the type of MSX we have, if MSX1 will launch the Rookie drive 720 ROM (floppy disk emulator), if it detects MSX2 it will launch the version with Nextor.

This new driver has been developed by Konamiman, and turns Rookie drive into a USB floppy disk controller. The USB FDD must comply with the UFI protocolor, and they must be faithful to this protocol, otherwise they will not work.

*Due to the differences in the implementations of the UFI protocol of the different floppy drives, its operation is not guaranteed.

This driver is for Nextor o.s.  “Nextor is a disk operating system for MSX computers. It is actually an enhanced version of MSX-DOS, with which it is 100% compatible, and it identifies itself as MSX-DOS 2.31 to MSX-DOS aware applications.”

A 320K DiskROM is also included in this driver, you can use this DiskROM to boot Nextor and a Filemanager like Multimente or SofaRun.

Very important, Nextor supports FAT12 and FAT16, so if you try to use a device in FAT32/exFAT will not work, (if you use SofaRun in the diskROM, then causes a black screen lock), if you stay blocked on the screen in black, reboot The MSX, when NEXTOR.SYS appears on the screen press CTRL + STOP, the message “Terminate batch file (Y / N)?” Appears, you give “Y”, then you can call “BASIC” _fdisk, which will allow you to erase the partitions of the pendrive and create new ones in FAT16 (caution with this option, erase everything!).

Rookie drive 720 supports only one virtual disk at a time. The use of several simultaneous disk images is not implemented yet.

Here is the summary of rookie drive 720 features:

When starting this driver the system will verify the existence of the AUTOEXEC.DSK file, if it is affirmative, it will proceed to treat it as the “inserted” image by default, ignoring the existing configuration in USXMSX.INI

With this command we can change the active folder inside the USB device:

You can return to the previous folder using:

This feature has been available since version 1.3.5

Load a .ROM file to the ram and start executing

(The file must be located in the root directory of the USB device, and filename must be in 8.3 format)

Simulates the “insertion” of a new disk, through this instruction the disk image to be used is specified. Disk images of up to 720 kbytes are currently supported.

The format of the call command is as follows:

(The file must be located in the root directory of the USB device, and filename must be in 8.3 format)

If the command is executed correctly we can access the list of files using the “files” command, and work normally using typical commands, such as: run, save, bload, etc …

To create a disk image from the PC we can use Disk-Manager, this program is very practical when creating new DSK and adding files. (http://www.lexlechz.at/en/software/DiskMgr.html)

After the restart, the last disk image that was used will be automatically inserted again, this action can be canceled momentarily by pressing the ESC key during hardware initialization. The internal operation contemplates the creation of the file USBMSX.INI, in which the name of the image to be loaded is saved, so that it is persistent both to reset and to shutdown the machine.

This command is in the experimental phase, since you need to execute internally the format command, which has not been fully developed. Currently, if we execute this command we will get a disk image of 720kbytes full of 0xff characters.

To create a new image just launch this command:

*Once the format  finishes you must use insertdisk command to operate with the new created disk image.

We will be able to restart the machine without a reset button, or to cut off the power. This command is useful when you insert a disk image that needs to be started directly to run, or when the image contains an MSX-DOS disk and the “call system” command does not work.

Format the virtual disk that is inserted.

It “removes” the virtual diskette, and deletes the file USBMSX.INI

Multi-disc games can be used, there are two modes of operation,

The operation is as follows, we will “insert” the image of the first disc, and when the game asks us to change the disc then: we will press and hold the disc number to be inserted and press the key that the game indicates (normally the bar spacer) and that’s it!